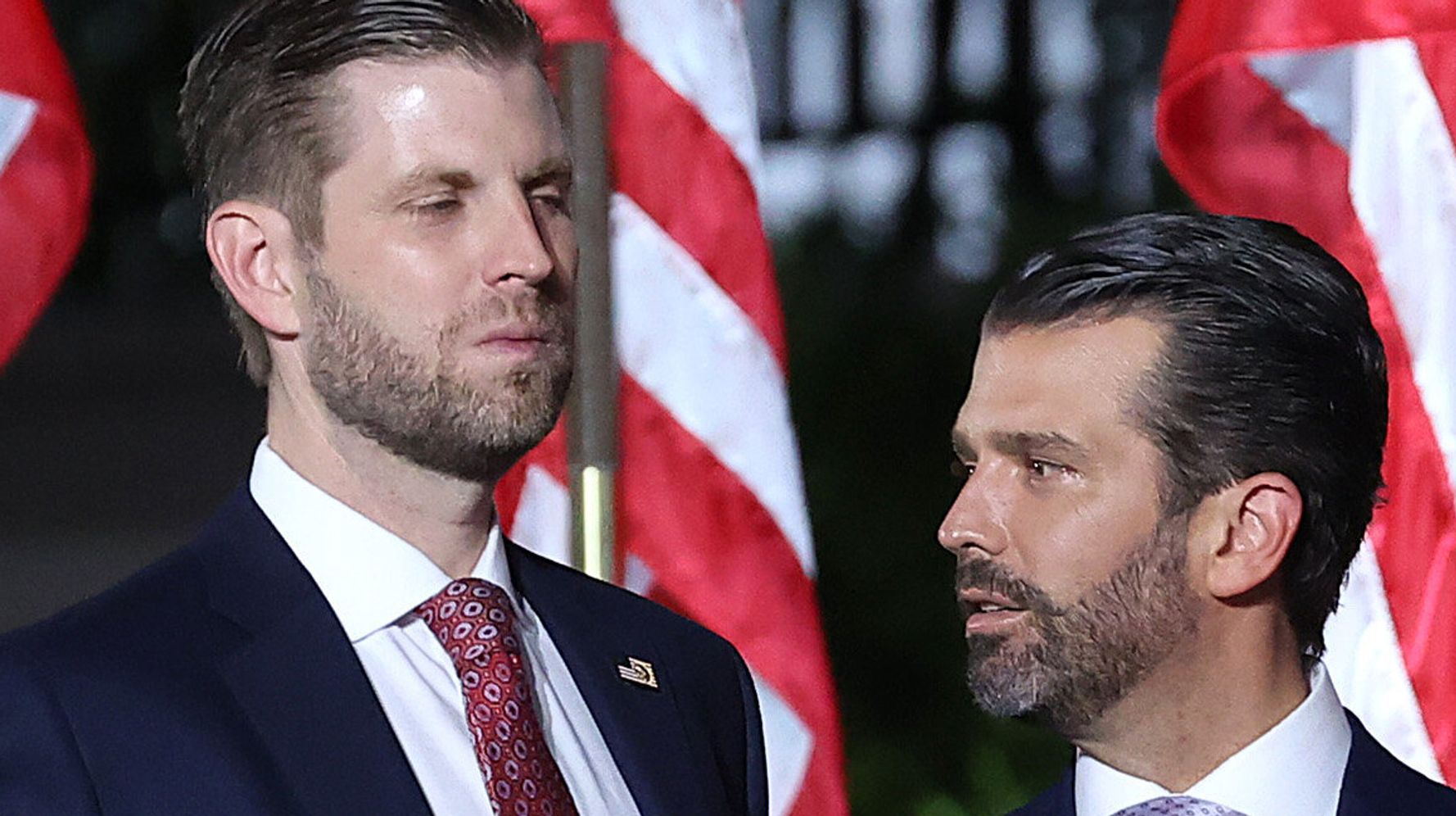 Eric Trump and Donald Trump Jr. made TV appearances on Thursday to respond to the charges that have been filed against The Trump Organization and its chief financial officer, Allen Weisselberg.

And the comments from ex-President Donald Trump’s sons, who are both executives in the Trump family business, raised plenty of eyebrows.

The Trump scions described the charging of the company and its CFO over an alleged tax fraud scheme (which both parties deny) as politically motivated and aimed at stopping their father from running for president again in 2024.

Per the indictment, the scheme sought to “compensate Weisselberg and other Trump Organization executives in a manner that was ‘off the books’” in that they “received substantial portions of their income through indirect and disguised means” to “substantially understate their compensation” and pay less tax.

But the Manhattan district attorney’s charges were “the political persecution of a political enemy,” Donald Trump Jr. declared on Fox News.

It was “no different” to Russian President Vladimir Putin’s treatment of opposition leader Alexei Navalny, he argued, likening it to “banana republic stuff.”

Don Jr says this indictment is “no different” than what Putin has done to Alexei Navalny.

(Navalny, who Don Jr. refers to as “Navatny,” was poisoned with a nerve agent and imprisoned.) pic.twitter.com/GGmLcIVi98

Eric Trump, appearing on Newsmax, said he wasn’t worried about being charged himself because his family had “always lived amazingly clean lives.”

He then tried to divert attention from the charges with an attack on President Joe Biden’s son Hunter Biden.

Eric Trump is not taking this well… pic.twitter.com/WtzimpjEhy

Eric Trump later appeared on Fox News and railed against the district attorney’s office for focusing “on $3.5 million to take down a political opponent” when, he claimed, crime “is rampant” and people are leaving “dirty” and “disgusting” New York City “in record numbers.”

“I mean, this is what they do, this is New York state for you,” he claimed. “This is worse than a banana republic. It’s truly horrible.”

Eric Trump’s defense of his company is that $3.5 million is really nbd. Also, Hunter Biden. pic.twitter.com/YOXHkdin5N

Eric Trump also appeared to dismiss the alleged scheme as being simply “employment perks” that shouldn’t be a criminal matter.

Does the lawyer for the indicted company that Eric is an EVP at know he’s on TV? pic.twitter.com/7udDv0VO41

Twitter users were surprised by the ex-president’s sons commenting on the active investigation in the first place, with some even suggesting they were inadvertently putting their foot in it with their defenses:

Bless his little heart. Someone tell Eric that neither “The amount we stole is hardly worth talking about” nor “There are people doing even worst crimes” are actual or effective legal defenses.

Clearly no one at Trump Org has told the nepotism hires that commenting on the criminal matter is unwise. Run your mouth, Eric. Run your mouth. pic.twitter.com/iulouUmiAn

If you are on the Trump Organization’s legal team, are you encouraging this? Are you quietly sending emails and texts urging them to not say much for a while? “I’m not Hunter Biden” will not be admissible at trial.

Likening a grand jury indictment for tax fraud under the U.S. legal system to Putin’s attempt to murder a political dissident… https://t.co/5R2Dv72Ngk

These things you are admitting to are against the law. That makes them criminal.