Something rare just happened in Congress. During an era defined by extreme partisan animosity, Republican and Democratic senators came together on Tuesday to pass a $1.1 trillion infrastructure package that invests billions of dollars in roads, bridges and infrastructure projects; provides federal funding to modernize public transportation and the electrical grid, allowing for more renewable energy.

At first blush, this looks like a huge win for President Biden, who campaigned on the importance of bipartisanship. And as my colleague Geoffrey Skelley previously reported, Americans like it (or at least they say they like it) when Republicans and Democrats work together.

But this bill is not without political risk for Biden and Democrats.

For starters, it faces a long path to becoming law. That’s because House Speaker Nancy Pelosi has held firm in her decision to not bring up the infrastructure bill in the House until the Senate passes a second, far more ambitious spending package through the budget reconciliation process. Progressive House members have also threatened to withhold support for the bipartisan infrastructure bill unless the Senate acts on this bigger package that includes funding for climate change and health care, among other priorities.

This could set up a big political fight for Democrats this fall. Sen. Joe Manchin of West Virginia, one of the chamber’s most vocal moderate Democrats, says he has not decided if he’ll support the legislation with its current price tag of $3.5 trillion, issuing a statement in which he warned of the bill’s “grave consequences” for the nation’s debt. Sen. Krysten Sinema of Arizona, another vocal moderate, said in late July that she will not support a bill of that price. Plus, touting ambitious bill packages hasn’t worked well for Democrats in the past. Back in 2010, the Affordable Care Act faced a similarly divided Democratic Party, and in fact, subsequent research suggests that the law hurt Democrats in that year’s midterms. One 2012 study found that Democrats who voted in favor of the ACA saw their vote share drop by 8.5 percentage points, on average. Moreover, Republicans didn’t just do well that midterm cycle — they won their largest share of seats in the House since the 1940s.

It’s also possible that voters will be turned off if the fight over passing the infrastructure and reconciliation bills drags on too long and is perceived as too complicated. Research has found that voters often punish — rather than reward — parties that move to achieve their policy goals.

One reason something like infrastructure appeals to Americans is because many think that improving infrastructure should be a priority in Washington. According to an AP-NORC survey in July, both Republicans and Democrats were overwhelmingly in favor of various proposals for the infrastructure bill, including funding for roads, bridges and ports as well as funding for pipes that supply public drinking water.

related: Presidents Used To Be The Faces Of Their Political Parties. Is That No Longer The Case? Read more. »

And this fits in Biden’s governing strategy of trying to pass measures that are popular with the overall electorate in the hope that voters will later reward him and Democrats. But it’s not clear whether that strategy will pay off. It’s certainly better than Biden trying to push through unpopular bills, but as the Washington Post’s Perry Bacon Jr. wrote for FiveThirtyEight earlier this year, popularity around the COVID-19 stimulus package that Democrats passed in Biden’s first 100 days may not result in electoral benefits. For instance, polling from the Pew Research Center found that support for the bill was especially high among lower-income Republicans, but at least as it pertains to Biden’s approval rating, Republican voters not only largely disapprove of Biden, they strongly disapprove of him as well. At the end of the day, it could be that most Americans are not going to break from their political views regardless of what the other side passes in terms of policy.

It’s also likely Republicans will try and use the high cost of the infrastructure and reconciliation bills as leverage against Democrats next year. A number of Republicans, including Senate Minority Leader Mitch McConnell, have already vowed that Democrats “won’t get our help” to raise the debt limit. Moreover, the bipartisan infrastructure bill now in front of the House is expensive. According to an estimate from the nonpartisan Congressional Budget Office, the bill is expected to add $256 billion to the federal debt over the next decade, and as we hinted at, debate over the debt limit this fall is already expected to further divide the two parties. Plus, polls suggest that even now voters are concerned about inflation and the federal government’s ability to handle it. According to a Hill-HarrisX poll in August, 31 percent of registered voters named inflation as their top concern when thinking about the future of the economy. Among Republicans, that number jumped to 37 percent, but 23 percent of Democrats also put inflation as their top concern.

With Congress in recess until mid-September, it’ll be awhile before we have a clear sense for where this political fight is headed, and which party has the upperhand, but for now, it’s possible that we’ve seen the limit to what popular bills can do. 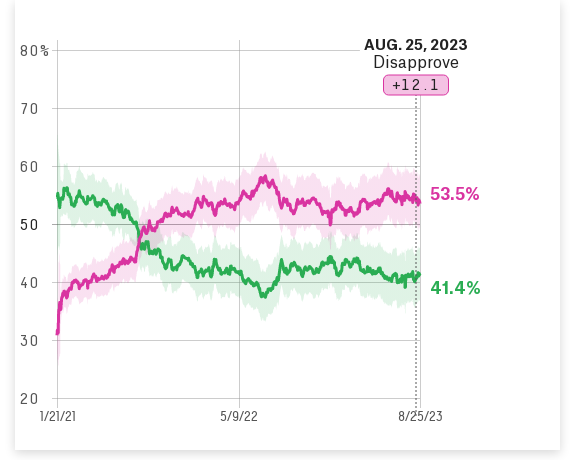