Today is the opening ceremony for the 2020 Olympic Games, which were delayed for almost a year due to the coronavirus pandemic. But not everyone is happy that the Games are finally going ahead.

Japan, the Olympic host country, has been slow to vaccinate its population against the coronavirus and is experiencing a spike in COVID-19 cases that have prompted the declaration of a state of emergency and the decision to bar spectators from most Olympic events. Against that backdrop, a Morning Consult poll conducted July 15-16 found that only 22 percent of Japanese adults supported holding the Olympics as scheduled, while 41 percent believed they should be canceled and 21 percent thought they should be postponed again. A few days later, the Asahi Shimbun, a Japanese newspaper, released similar findings: Only 33 percent of respondents supported holding the Olympics, while 55 percent were opposed. Even worse, the Japanese believed 68 percent to 21 percent that the Games would not be “safe and secure.”

Opposition to the Games was particularly high in Japan, but it was hardly the only country that felt that way. From May 21 to June 4, Ipsos polled adults in 28 countries and found that the average country believed the Olympics should not go ahead amid the pandemic, 57 percent to 43 percent. South Korea (86 percent to 14 percent) and Japan (78 percent to 22 percent) were the most Olympics-skeptical, while Turkey, Saudi Arabia and Russia were most comfortable seeing the Games proceed. 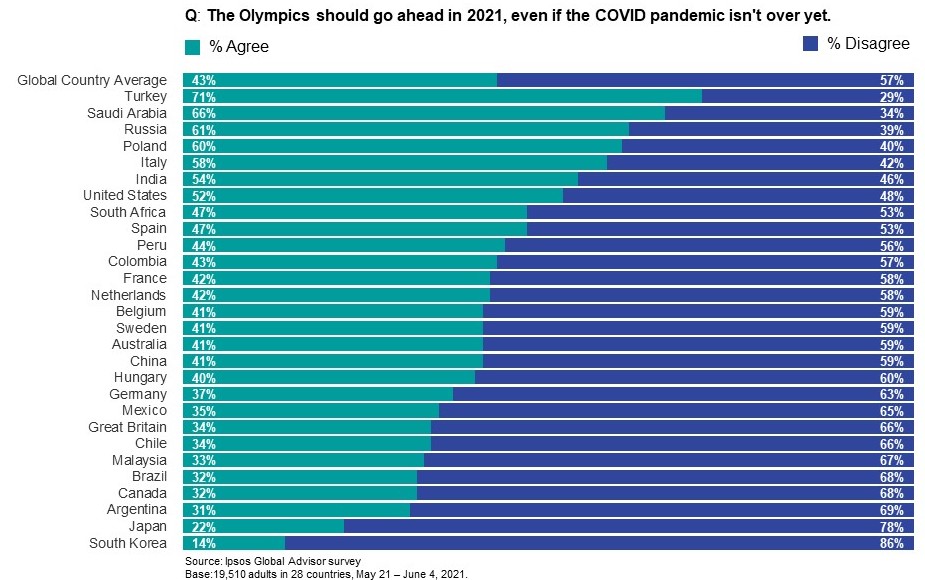 Americans were split, according to Ipsos: 52 percent wanted the Olympics to go ahead, while 48 percent thought they should not. In a July 9-13 survey from Morning Consult, fewer Americans said they thought the Games should be canceled or postponed (just 27 percent) but that wasn’t because an overwhelming majority thought the Games should be held as scheduled: Only 45 percent said so, a similar share as Ipsos found. (The remaining 28 percent didn’t know or had no opinion.)

There were also big differences in how interested each country is in the Olympics. According to Ipsos, India was the most excited for the Games (70 percent of Indian respondents said they were very or somewhat interested in them), while Belgium (28 percent) and South Korea (30 percent) were the least interested. 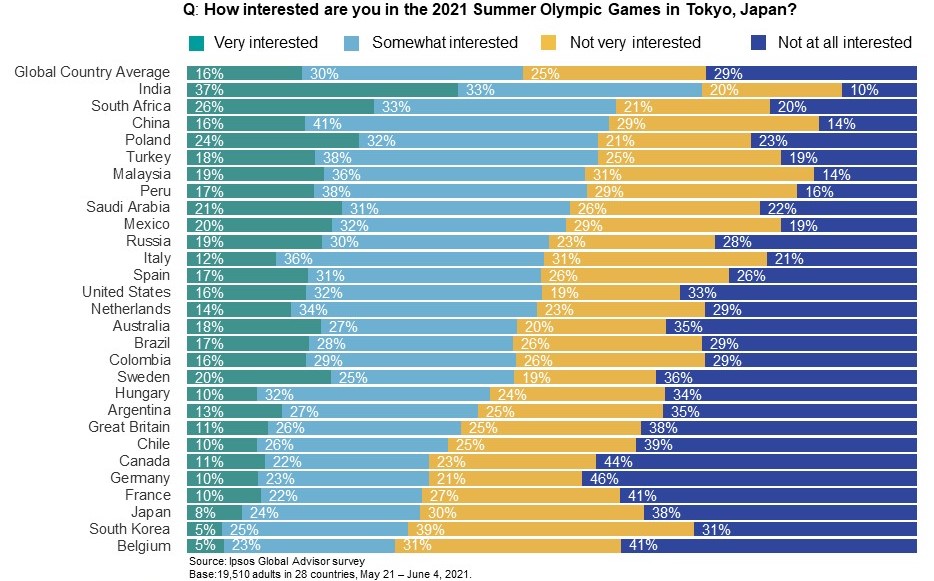 Surveys of the U.S. were a bit more consistent. Fifty-one percent of American adults told Morning Consult they plan to watch some or a lot of the Olympics on TV, about the same as the 48 percent who told Ipsos they were either very or somewhat interested in the Games. However, that number was only 37 percent in a July 16-19 YouGov poll of the U.S.

related: Which Countries Are Doing Better — Or Worse — Than Expected At The Tokyo Olympics? Read more. »

The pollsters also asked which events various countries were most interested in following. And across the 28 countries in the Ipsos poll, 30 percent of respondents picked soccer (better known to most of them as football) as one of their top three events, 27 percent chose athletics/track and field and 22 percent picked aquatics.

But again, each country has its own preferences. For example, 63 percent of Malaysians ranked badminton as one of their top three events; 38 percent of Chinese adults did the same with table tennis. For their part, the Japanese are looking forward to aquatics, track and field and baseball/softball. The latter may have a special place in Japan’s heart, as they were readded as Olympic events after a 13-year hiatus due to their popularity in Japan, and the Japanese are expected to medal in each. Indeed, according to Morning Consult, 21 percent of Japanese adults are very interested in watching baseball/softball at the Tokyo Olympics (the highest percentage of any sport), and another 28 percent are somewhat interested.

Meanwhile, according to Morning Consult, Americans are most interested in watching gymnastics (62 percent very or somewhat interested) and swimming (56 percent), two events at which the U.S. has historically excelled. (Sadly for America’s national pastime, only 44 percent said they were interested in watching baseball/softball, putting it in eighth place behind diving, track and field, beach volleyball, basketball and volleyball.)

The American love affair with gymnastics may be due in large part to one person: Simone Biles. Morning Consult found that the artistic gymnast was both the most famous (67 percent name recognition) and most popular (51 percent favorability) Olympian in the U.S. (Soccer player Megan Rapinoe and swimmer Katie Ledecky were the runners-up.) Likewise, Ipsos found that Biles is, by far, the athlete Americans are most excited to watch in Tokyo. Even more impressively, when Morning Consult asked Americans an open-ended question about their favorite sports figure in a July 1-6 poll, Biles ranked fourth — behind only Tom Brady, Michael Jordan and LeBron James. That means that, for the next couple weeks, Americans will be witnessing no less than one of the sporting world’s biggest stars on its biggest stage.