The Twitter account formerly used by the late Herman Cain fired off a head-scratching message on Sunday, insisting that the coronavirus “isn’t as deadly” as once thought.

Cain died in July at the age of 74 after being hospitalized for more than a month with the COVID-19 infection. 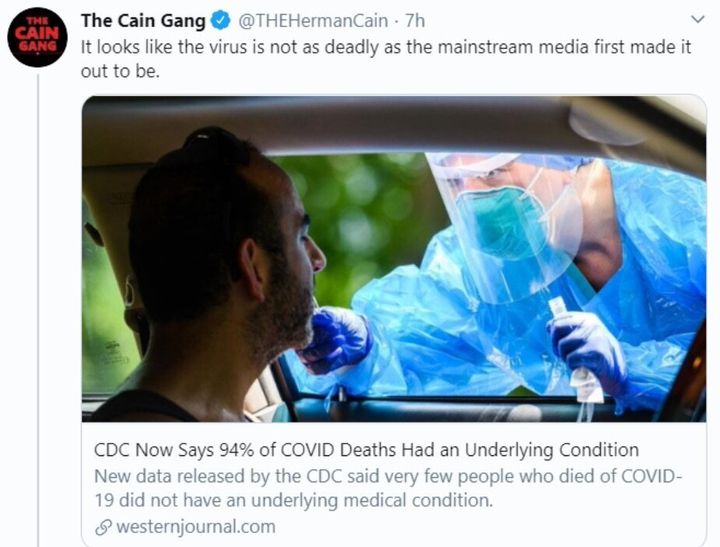 Given Cain’s own cause of death, the tweet ― which was eventually deleted ― drew a rather stunned response from critics on social media:

Can we dig Herman up and have independent doctors confirm this?

PS: Do you know how fucking creepy it is that you continue to tweet from his account? https://t.co/QCyR1LxnXx

EFFING IRONIC: a person (Herman Cain) who died of #COVID19 tweets from the dead to tell us that COVID is not as deadly as it is made out to be.

➡️ Please report this account below for “fake” name. Cain passed away. https://t.co/c9X3tk3ms8

The fact that Herman Cain’s Twitter account is tweeting about how Covid-19 isn’t as deadly as ✨the media✨ makes it out to be when Cain’s death was the result of Covid-19 is just absolutely pure lol.

Herman Cain being killed by a pandemic and then later tweeting that the pandemic isn’t really that deadly isn’t the most important thing to happen in 2020 but it is by far the craziest https://t.co/J96aaOvaKt

Tell that to Herman Cai—

Little social media tip: this would be more convincing coming from an account of someone who hadn’t died of coronavirus.

Sir, the virus killed you. You died from it.

Does Herman Cain, who died a month ago of covid-19, still tweeting that covid-19 is a hoax, count as a “zombie apocalypse?” Asking for my bingo card. https://t.co/jEtcZEjoQM